Our FOLIO Library Migration is in progress! Thanks for your patience; there may be intermittent service interruptions during this time. Learn more

All Smith College Libraries locations will be closed Monday, July 4 for Independence Day.

Video recordings of many of the Friends' events are available on the Libraries' YouTube channel.

Band of Sisters: The Smithies Who Brought the Grecourt Gates to Smith 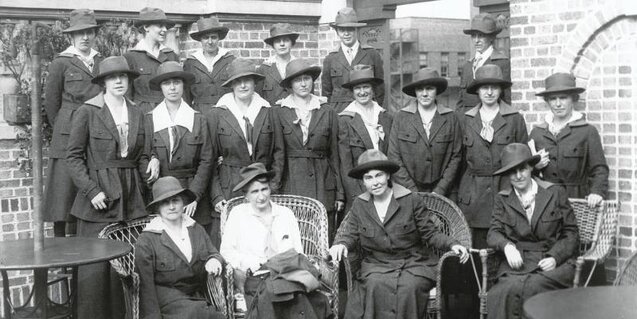 In 1917, eighteen Smithies traveled to the front lines of World War I to help French civilians. This event will explore the history of the Smith College Relief Unit and the novel that has led to renewed interest in the accomplishments of these brave women. College Archivist Nanci Young will introduce the event, with Sarah MacLean ‘00 serving as MC. Guest speakers include Jennifer Hall-Witt, historian, and Lauren Willig, author of Band of Sisters which is the Smith College Alumnae Book Club current read. Co-sponsored by the Friends of the Smith College Libraries and the Office of Alumnae Relations and Development. View the video.

In her new biography, University of Nebraska-Lincoln English professor Melissa Homestead '85 explores the creative collaboration between Willa Cather and her longtime friend and partner, Smith alum Edith Lewis, including her contributions to Cather’s writing. Homestead discusses her findings with book critic and fellow Smith alumna Bethanne Patrick. Helen and Laura Shedd Professor of English Rick Millington introduces the speakers. Co-sponsored by the Smith College English Department and the Friends of the Smith College Libraries. April 27, 2021. View the video.

Library Partners: New Roles for Students in the Libraries

Navigating the News: Safeguarding Journalism in an Age of Misinformation

McGrath Lecture: Conceptional Sensations - From Germany to Japan and Back Again

Panel Discussion: Publishing for Young Readers - The Success of the Baby-sitter's Club and Other Publishing Phenomena

Ann M. Martin ’77, bestselling author of the Baby-sitter's Club series, and two legendary publishing professionals, Jean Feiwel and Liz Szabla, give an insider’s look at publishing for children over the past thirty years. Dean of the College and Vice President for Campus Life Susan Etheredge ‘77 moderated the panel. Thursday, October 11, 2018. View video.

In Humility, Knowledge: One Smithie's Journey into our Wild, Lascivious Language

Kory Stamper '96, the author of Word by Word: The Secret Life of Dictionaries delivered the McGrath lecture. Stamper is a lexicographer at Merriam-Webster where she also writes, edits, and appears in the "Ask the Editor" video series. She blogs regularly on language and lexicography on her blog Harmless Drudgery, and her writing has appeared in The Guardian, The New York Times, and on Slate.com. Thursday October 5, 2017. View video.

Italia Mia: How English and American Travelers Made Italy their Own

Werner Gundersheimer presented a lecture based on his collection of more than 600 published and manuscript travel narratives about Italy. Dr. Gundersheimer is director emeritus of the Folger Shakespeare Library in Washington D.C. Thursday, October 6, 2016. View video.

From Paper to People: A Journalistic Approach to the Archives

What Does the Future Hold for the Past? Envisaging Smith College Special Collections

Piper Kerman, Up Close and Personal

The author of Orange is the New Black, Piper Kerman '92, spoke with book critic Bethanne Patrick '85 about her advocacy work highlighting the conditions of incarcerated women, and how the Netflix series is making this topic a national conversation. October 2, 2014. View video.

Su Meck '14 read from her book "I Forgot to Remember"

Su, an Ada Comstock Scholar who graduated in May 2014, read from her book about her total memory loss following an accident at age 22. April 25, 2014.

Former Smith College President Carol Christ and Susan Van Dyne, Professor of the Study of Women and Gender and Chair of the Archives Concentration gave a presentation on October 25, 2012. View video.

Against Wind and Tide, Diaries and Letters of Anne Morrow Lindbergh, 1947-1986

Reeve Lindbergh read from her mother’s writings to provide context for this, the final installment of her published diaries. November 7th, 2012. View video.

The Future for Books in the Digital Age

University of Virginia professor, Michael F. Suarez S.J., spoke about the enduring relevance of the printed book. Read more about his topic. April 4, 2012.

Books, Libraries, and the Digital Future

A lecture presented by Harvard University Librarian Robert Darnton who is, among many things, the driving force behind the Digital Public Library of America project. March 12, 2012. View video.

Nothing Daunted: The Unexpected Education of Two Society Girls in the West.

Author and executive editor of The New Yorker, Dorothy Wickenden discussed the adventures of her grandmother  Dorothy Woodruff with Rosamond Underwood (both 1909 alums) in remote Elkhead Colorado. March 1, 2012.

Romance Literature: Love it or Leave it

Shake It Up, Baby! The Future of Academic Libraries

A lecture on the life and legacy of Smith’s third president by Peter I. Rose, Sophia Smith Professor Emeritus of Sociology and Anthropology. February 18, 2010.

The Heart of Our Place of Learning: William Allan Neilson Library 1909-2009 (Online Exhibition)

Neilson Library opened for research and discovery on November 22, 1909. To celebrate the Library’s centennial and document the history of Smith's first library building, the College Archives presents this online exhibition.

Each of Smith College’s branch libraries has its own unique history and place within the scholarly community. The exhibitions give some background of the events and people behind their founding, and the physical spaces they have occupied over the years.