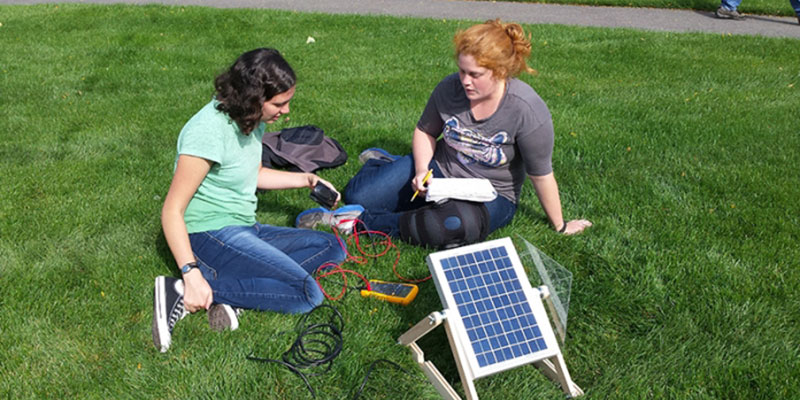 Creating a sustainable building has been a critical objective in the design and architectural planning process for the new Neilson Library; one that will reflect the college’s commitment to sustainability.

The vision is inspired by the inherent sustainability of our campus libraries, which have lent millions of items over the decades, avoiding the need for individual books to be printed for each individual library user. A student in the Center for Sustainability discovered that the most circulated book in the Smith Libraries is Calculus: The Language of Change. It was borrowed 972 times in AY ‘15-16. This repeated circulation saved:

The sustainability vision for the new Neilson Library includes the following components:

Rather than construct an entirely new building, the college incorporated Neilson's core exterior shell (the original 1909 brickwork), south lower-level foundations and portions of the north retaining walls into the new structure. Soils excavated from the construction site were tested, stored, and reused when applicable. In addition, interior building elements such as wood wall paneling and furniture were saved and will be brought back in for use in the new facility.

An elm tree from the Neilson grounds is also being repurposed for the building project. The tree became unstable during construction and had to be removed; the wood is being transformed into furniture for the new Neilson Library. Woodworker Sam French is fabricating three live edge reading room tables, four live edge benches, and a one-of-a-kind live edge cookie table, all designed by Maya Lin. Live edge furniture is designed to incorporate the natural contours of wood planks; rather than cutting away knots and creating square edges, only the bark is removed.

The college committed early on to make the new Neilson Library as healthy as possible for the students, faculty, staff, and visitors who will be using it. Recent studies have found that cognitive function scores were 61 percent higher in green building conditions.

The college has used the Neilson Library project to advocate for positive change in the marketplace, encouraging manufacturers to remove toxic chemicals from production and create a market demand for healthy, innovative products. The team educated and advocated to over 100 manufacturers as a result of this targeted approach.

Manufacturers were also encouraged to eliminate “Red List” chemicals - 22 classes of chemicals found in building materials that are known toxins to humans and the environment. These toxic classes of chemical have become standard in manufacturing. Wherever possible, the new Neilson Library is being constructed without materials on the "Red List." Here are some examples of healthier materials used in the Neilson Library:

The Path to Carbon Neutrality

Smith joined the Climate Leadership Network in 2007 by signing the Carbon Commitment. In doing so, Smith pledged to create a climate action plan that included “a target date for achieving carbon neutrality as soon as possible.” Smith’s Sustainability and Climate Action Management Plan (SCAMP) set a target date of 2030. Carbon neutrality (having no net GHG emissions) can be achieved by minimizing greenhouse gases (GHG) emissions as much as possible and by accounting for the remaining emissions elsewhere. One approach is for institutions to use carbon offsets—a reduction or removal of carbon dioxide equivalent GHG emissions that is used to counterbalance or compensate for emissions from another activity. Campus GHG emissions levels have been reduced by almost 28 percent since our peak emission year of 2004. 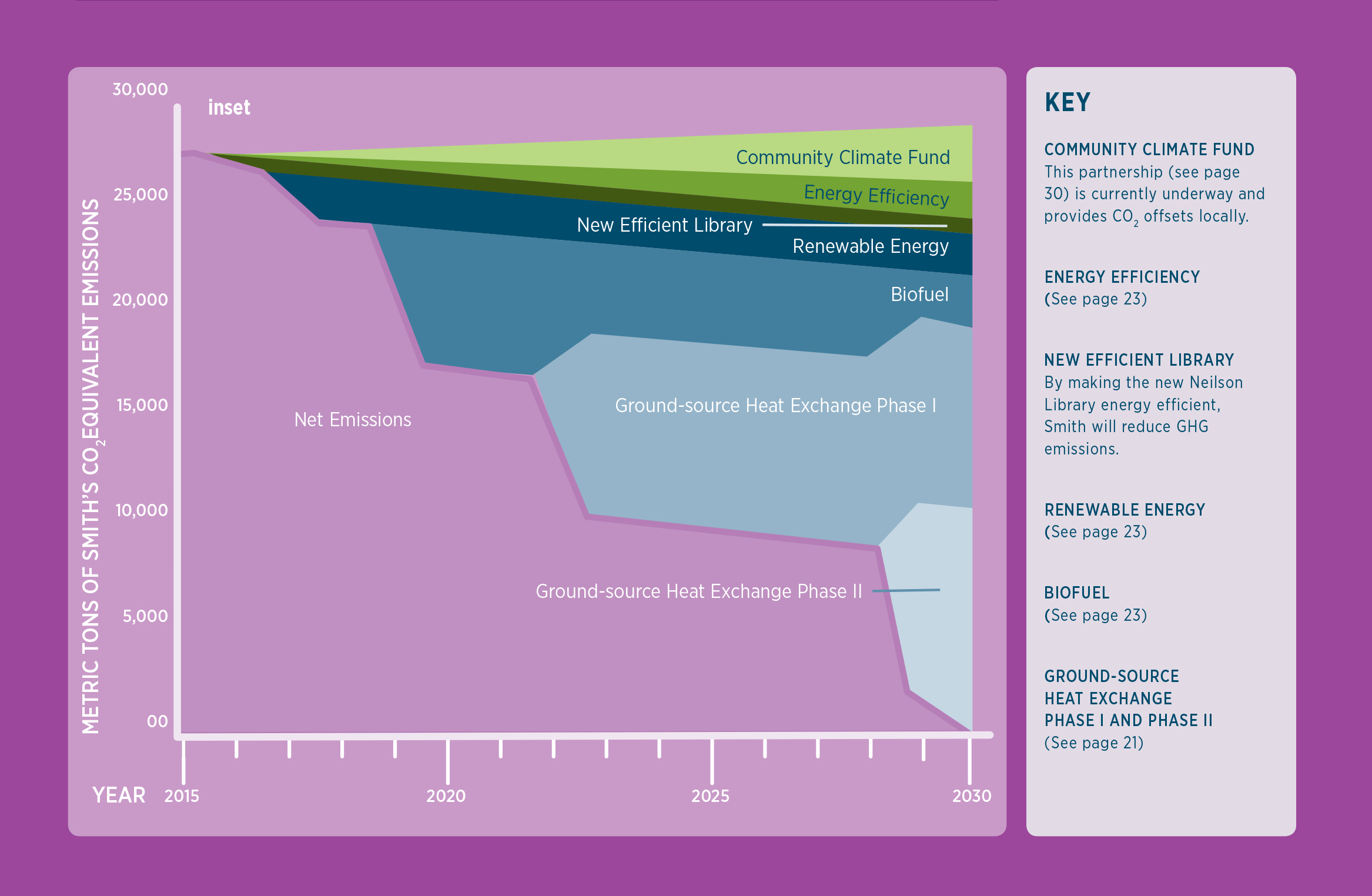 The energy efficiency of the new Neilson Library is one of the elements that will help Smith meet its carbon neutrality goal. The library will be constructed with the goal of being the most energy-efficient library with archival storage in North America. Below is a comparison of building energy use, looking at both bothings owned by Smith, and other libraries in the U.S. (Pew and Clinton libraries). 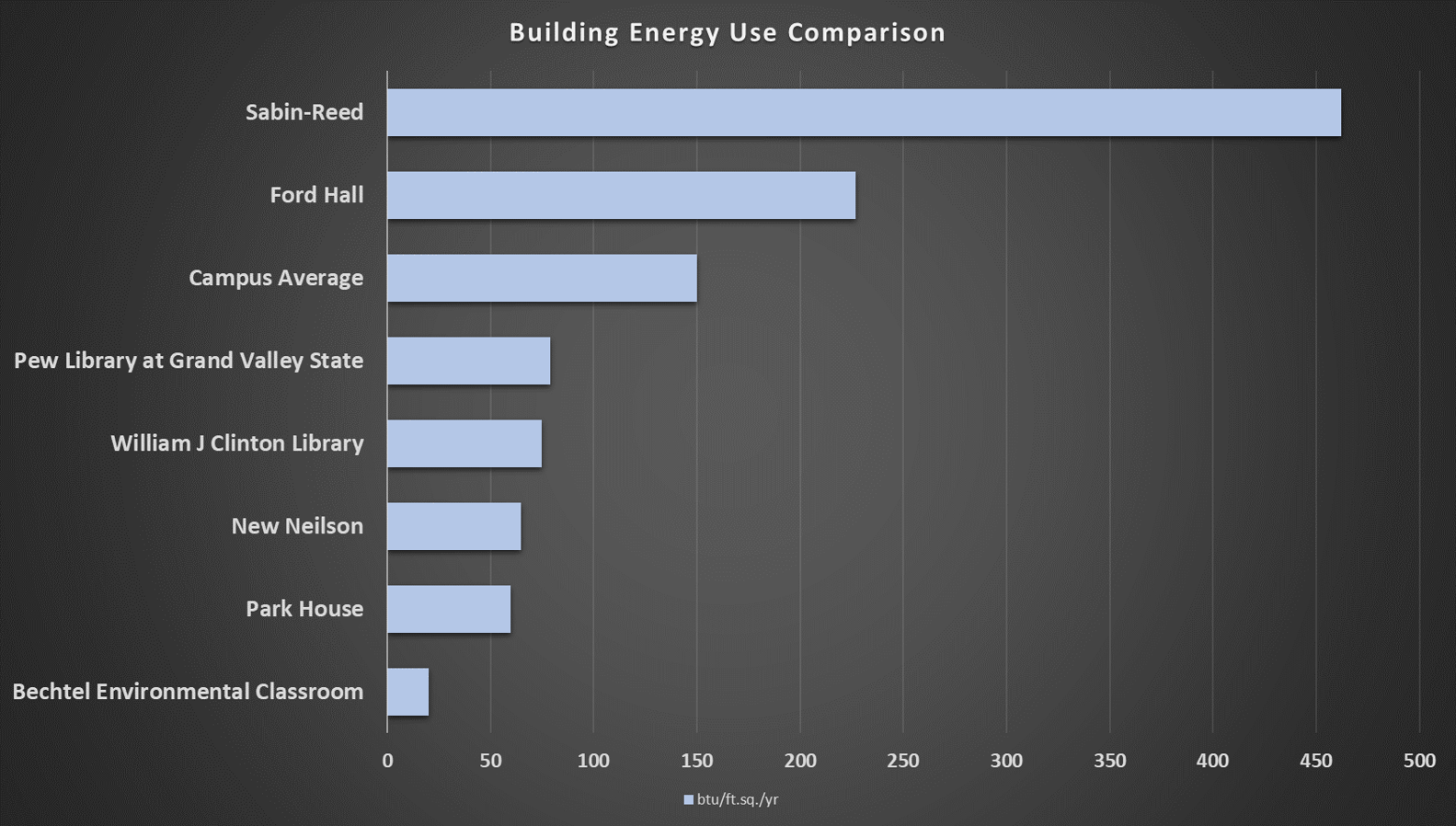 The building is also aiming for LEED Gold certification. LEED (Leadership in Energy and Environmental Design) is the most widely used green building rating system in the world, and the college is using v4.1 - its most stringent version.

The landscape design surrounding Neilson Library will include exclusively native plant species. The design is “climate forward”; species for which Northampton is at the northern edge of their natural range have been prioritized because they will thrive on our campus even as the climate warms. In addition, tough local plants have been selected for use due to their ability to tolerate extremes in both temperature and precipitation.

Many of the plants were sourced from Native Plant Trust's nursery at Nasami Farm, which aims to grow as much as they can from wild-sourced seed. Unlike most commercial nursery plants, which are typically clonal, the genetic diversity (within species) of this type of production is believed to have more capacity to support the natural, living systems we are connected to and more resilience in the face of climate change.

The landscape is designed to thrive without irrigation, so there won’t be any installed on the grounds surrounding the Neilson Library. The grounds will also feature several acres of low-maintenance lawn alternatives that will require little mowing, and very little water or fertilizer.

The design and plant materials have been selected not only for aesthetics, but to provide habitat for insects, birds, and other local animals.

The new paths around the library are designed for easy navigation by people of all abilities, and outdoor commons like the amphitheater and restored lawns will encourage dialogue and foster connection.