History of the Smith College Libraries 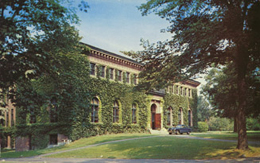 From 1875 to 1909, Smith College relied primarily on the private Clarke Library and the public Forbes Library (dedicated in 1894). The first college reference library was formed with a $4,000 allocation in 1878 and housed in various rooms in College Hall; it was moved to Seelye Hall when that building opened in 1900.

The core of the present main building was erected in 1909, funded by a gift from Andrew Carnegie and matching gifts from alumnae and friends. It was enlarged in 1937 and, in 1946, named the William Allan Neilson Library in honor of the College's third president. In 1962, two wings were added and extensive interior rearrangements made. The last major expansion and renovation began in 1978 and was completed with the rededication of Neilson Library in November 1982 and of the converted Alumnae Gymnasium in May 1983.

In the fall of 1987, the libraries acquired their millionth volume. This watershed was celebrated by the acquisition of the Epistole Devotissime of St. Catherine of Siena in an Aldine edition of 1500 to be designated officially as volume 1,000,000. The Smith College Libraries now hold over 1.4 million items including books, periodicals, microforms, maps, scores, recordings, manuscripts, archives, film and video, computer-readable materials, graphic arts, memorabilia and cuneiform tablets.

In 2010, the college engaged Shepley Bulfinch to partner on a master plan for all of the college’s libraries. Soon after, the college worked with Shepley Bulfinch on several studies to assess what could feasibly be accomplished with current library space. In 2014, the trustees approved the concept of a redesign of Neilson and the hiring of an architect.  Construction for the project began in 2017 and the New Neilson Library opened on March 29, 2021. It retains the original 1909 building while restoring the campus flow disrupted by a series of later additions. Learn more about the New Neilson Library renovation project.

The Music Department began its collection in 1911 and hired the first music librarian in 1922. The library was transferred administratively to the college Libraries in 1968. That same year it was moved to new quarters in the Mendenhall Performing Arts Center and named for Werner Josten (a professor in the Music Department).

Started in 1888, the science department libraries originally included Chemistry in Stoddard Hall, Physics in Lilly Hall, Geology in Seelye Hall, Botany, Zoology and Bacteriology in Burton Hall. Other collections, now merged with the Neilson Library or Science Library collections, were located in Scott Gymnasium (Physical Education) and the Plant House (Horticulture). In 1937, some thought was given to starting a psychology library in Pierce Hall, but the plan was never realized.

The Art Department started a collection of books and other materials as early as 1876. The Hillyer library was transferred administratively from the Art Department to the college Libraries in 1968.

The Hillyer Art Library, after a few years in Stoddard Hall during the construction of the new Fine Arts Center, occupied its present facility in 1972.

During the renovation of the Fine Arts Center from 2000 to 2002, art library collections were divided between temporary art library facilities in Bell Hall at the Clarke School for the Deaf and the Smith College Libraries storage facility at 126 West Street.  With reconstruction of the Brown Fine Arts Center complete, Hillyer Art Library reopened its new facilities in August 2002.

As a part of the 1962 addition to the Neilson Library, the paneled Rare Book Room was created with its own secure stacks.

The collection of rare books had been started by its first curator, Marion Brown, sometime in the early 1940s with items culled from the general collection. In January 1994 the Board of Trustees voted to name it the Mortimer Rare Book Room, in honor of Ruth Mortimer Lancaster '53, curator and assistant librarian since 1975. Following her death on January 31, 1994, the room was dedicated in April of 1994 amidst an outpouring of special funds and gifts. In summer 2017 the Mortimer Rare Book Room, together with the rest of the Smith College Special Collections, was temporarily relocated to the Young Library in order to make way for the construction of the New Neilson Library (2017-2020).

The College formally established the Smith College Archives in 1921 when, after years of unofficial collecting, Nina Browne, class of 1882, was appointed archivist of the College.

The Sophia Smith Collection, one of the two principal repositories for primary sources in U.S. women's history, was founded in 1942 by the Friends of the Libraries.

These collections were administratively separate from the College Library until 1984, when they became library departments. From the 1960's, they occupied space in Neilson Library, and in 1982 moved to the renovated and now-adjoining Alumnae Gymnasium. In summer 2017 the Sophia Smith Collection and College Archives, together with the Mortimer Rare Book Room, were temporarily relocated to the Young Library in order to make way for the construction of the New Neilson Library (2017-2020).

The Smith College Libraries' first automation efforts were in 1974 when the department joined the New England Library Information Network (NELINET). Participation in NELINET provided the Libraries access via interactive terminals to the international shared bibliographic data of OCLC, Inc. New techniques for both cataloging and interlibrary loans were introduced. By 1981, all of the Five College libraries signed a contract with OCLC to develop a local integrated library system with union catalog, acquisitions, serials control, cataloging and circulation components. In 1985, all five libraries began using the LS2000 system for cataloging. The Circulation department in the Neilson Library started using the system for loans in January 1988. The card catalogue in the Neilson Library was frozen (left in place but no longer maintained) in July 1988, with Online Public Access Catalog (OPAC) terminals replacing it. The Young Science Library automated its circulation through LS2000 in 1990. Also that year, the Smith College Libraries purchased a stand-alone automated serials and acquisitions system from Innovative Interfaces, Inc.

In 1992, given various ongoing difficulties with the LS2000 system, the Five College libraries began planning for a replacement system; administrators and computing staffs from each campus were involved. In 1993, a contract was signed with Innovative Interfaces, Inc., and in early 1994 the Five College Online Library System was brought up with all campuses employing modules for circulation, public access, and cataloging. Serials and acquisitions were added to the system that spring and Smith folded in its stand-alone operation. This was the first library automated system for Smith and the Five Colleges that integrated all functions across campuses, and the first time that all Smith's branch libraries are automated for circulation, reserves and serials management.

In 1992, with funding from the Keck and Davis foundations, a LAN-based system of locally mounted CD-ROM databases was brought up at Smith in the Young and Neilson Libraries. The following year, Neilson was completely rewired for computer networking; in 1994 when Innovative Interfaces was launched, the Libraries moved all administrative computing to a networked file-server configuration. Access to e-mail, word processing, and library systems and databases was combined and extended. In the fall of 1994, the CD-ROM network was expanded, and a new menu interface introduced on public-access computers. Entitled the "Smith Libraries Gateway," the menu provided a single-point of access to the OPAC, the CD-ROM network, licensed databases and Internet resources. The libraries and the Information Systems Department began active collaboration in designing menu interfaces and in training faculty and students in the use of the Internet.

The “Electronic Classroom,” located on Level 1 of the Neilson Library, opened in February 2000. The room contained twenty student and one instructor computers, a printers and projection and accommodated classes of up to forty students. The primary purpose of this classroom was to offer library instruction to classes. When not in use for classes, the room was used for student study and other activities requiring computers.

The Nonprint Resources Center (NPRC) was opened in 1984 in the lower level of the Alumnae Gym and its first Director appointed in 1987. In 1991, the former Electronics Department of the College was incorporated into the NPRC. In 1999 the Center split from the Libraries and became an administrative unit of Information Technology Services called Media Services. At that time, the collection of videotapes, films and other media materials became a unit of the Public Services Division of the Libraries. In 2001, the nonprint materials were moved to the circulation department of Neilson Library. In 2005 the Center was renamed the Center for Media Production (CMP) under the auspices of Educational Technology Services, a unit of Information Technology Services. In 2017 the Center for Media Production relocated to the Henshaw Complex to make way for the construction of the New Neilson Library (2017-2020).

Clarke School for the Deaf

Smith College and the Clarke School for the Deaf jointly maintain on the Clarke campus, the Rogers Hall Professional Library which was renovated and enlarged in 1977. Holdings of this library are now integrated into the Smith College Libraries' online catalog and the staffs of the libraries cooperate to facilitate cataloging, acquisitions and other services. The Library at 47 Round Hill Rd. was closed in June 2012. Materials were transferred to the Smith libraries collections.

In 1951 Smith joined the University of Massachusetts, Amherst College and Mount Holyoke College to form the Hampshire Inter-Library Center (HILC). This consortium was the first instance of cooperation among the four schools (and one of the earliest library consortia in the United States). The Center was intended as a depository for less frequently used research materials, primarily serials and large sets, from the collections of the four libraries and jointly owned by all four. Hampshire College, which opened in 1970, joined HILC as its fifth member. HILC later came under the administrative umbrella of Five Colleges, Inc., and its collections were distributed among the member libraries.

In September 2000, The Louise W. and Edmund J. Kahn Liberal Arts Institute occupied permanent quarters on the third floor, south wing, of Neilson Library. Developed during the college's 1997 self study, the Kahn Institute provides a setting--outside the curriculum but creatively linked to it--in which faculty, together with students and visiting scholars, writers and performers, work together intensively on projects of broad scope. In 2017 the Kahn Institute relocated to 21 Henshaw Avenue to make way for the construction of the New Neilson Library (2017-2020).