Our FOLIO Library Migration is in progress! Thanks for your patience; there may be intermittent service interruptions during this time. Learn more

All Smith College Libraries locations will be closed Monday, July 4 for Independence Day. 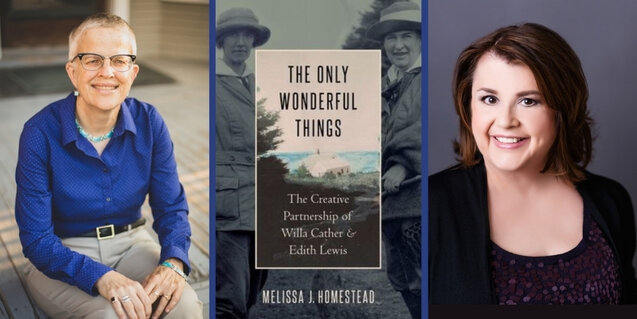 In her new biography, Melissa Homestead '85 explores the creative collaboration between Willa Cather and her longtime partner, Smith alum Edith Lewis 1902, including her contributions to Cather’s writing. Homestead will discuss her findings with book critic and fellow Smith alumna Bethanne Patrick '85. Helen and Laura Shedd Professor of English Rick Millington will moderate the event, which is co-sponsored by the Smith College English Department and the Friends of the Smith College Libraries.

Tuesday, April 27 at 7:00 p.m. EST. Virtual event. View a recording of the event on the Libraries' Youtube channel.

Melissa J. Homestead '85 is Professor of English and Program Faculty in Women’s & Gender Studies at the University of Nebraska-Lincoln, where she also directs the Cather Project and serves as Associate Editor of the Complete Letters of Willa Cather: A Digital Edition. A 1985 magna cum laude graduate of Smith, she wrote her undergraduate honors thesis on Cather as a lesbian author. She is not, however, all Cather, all the time. She is president of the Catharine Maria Sedgwick Society, maintains an active research agenda in 19th-century American women’s writing and publishing history, and hopes to write a dual biography of Annie Adams Fields and Sarah Orne Jewett, whose relationship defined the so-called “Boston marriage.”

Bethanne Patrick ‘85 is a writer who tweets @TheBookMaven, where she has over 200,000 followers. One of Flavorwire’s “35 Writers Who Run the Literary Internet,” she enjoys all forms of literary community, on- and off-line. Patrick’s book reviews and author profiles appear frequently in The Washington Post, where she also writes a monthly column on hot books; The LA Times; NPR Books; and others. The author of two books for National Geographic and the editor of an anthology titled The Books That Changed My Life, she is currently working on a memoir for Counterpoint Press. Patrick lives in Northern Virginia with her husband, their miniature schnauzer Molly Bloom, and far too many books.

Helen and Laura Shedd Professor of English Language & Literature Richard Millington teaches courses in American literature, with a focus on writers of the 19th century and on 20th-century multiethnic literature. He has written on Nathaniel Hawthorne, Willa Cather and Alfred Hitchcock; his current projects explore the emergence of a distinctive conception of leisure in 19th-century American literature and the nature of Willa Cather’s  modernism.