Lecture: “Keep the Damned Women Out,” The Struggle for Coeducation, September 26, 2018 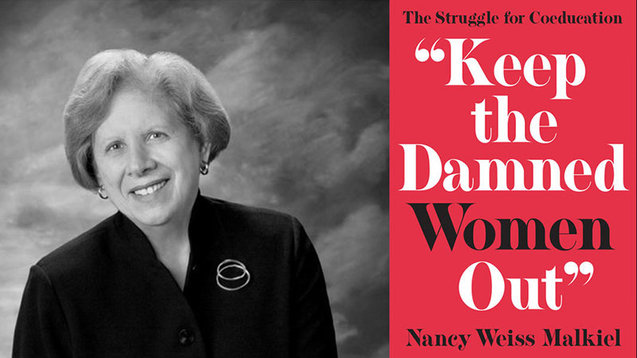 A scholar of 20th-century American history, Malkiel is the author of “Keep the Damned Women Out”: The Struggle for Coeducation, a study of the cascade of decisions for coeducation at elite institutions of higher education between 1969 and 1974. Inspired by her education at Smith and her decades as a professor and dean at Princeton University, Malkiel investigated why a number of very traditional, very conservative, highly prestigious colleges and universities in the United States and the United Kingdom decided to go coed, seemingly all at once, in a remarkably brief span of time and why, at the same time, her alma mater chose not to. Coeducation met with fierce resistance. As one alumnus put it in a letter to his alma mater, "Keep the damned women out." Focusing on the complexities of institutional decision making, this book tells the story of this momentous era in higher education—revealing how coeducation was achieved not by organized efforts of women activists, but through strategic decisions made by powerful men.

“Keep the Damned Women Out”: The Struggle for Coeducation is available as ebook through JSTOR (Smith login required from off campus) and in print through the Five College Library Catalog.

"It's partly autobiographical," Malkiel explains how the book came to be…

I had been a graduate student at Harvard in the mid-/late 1960s, when the relationship between Harvard and Radcliffe was beginning to be addressed. I joined the Princeton faculty in 1969 as one of the first three women in the professorial ranks; 1969 also happened to be the year when the first women undergraduates arrived. I served as dean of the college, with responsibility for undergraduate education at Princeton, for 24 years. At the same time, I graduated from and served as a trustee of Smith, a women’s college that decided not to go coed. I was very interested in how coeducation came to be embraced at Princeton and so many other elite men’s schools, in why Smith decided against coeducation, and in how women’s education worked in the institutions I knew best.

Malkiel conducted significant research here at the Smith’s College Archives, making use, among others, of the Thomas C. Mendenhall papers, president of Smith 1959-1975; and faculty meeting minutes. View more documents related to coeducation at Smith.