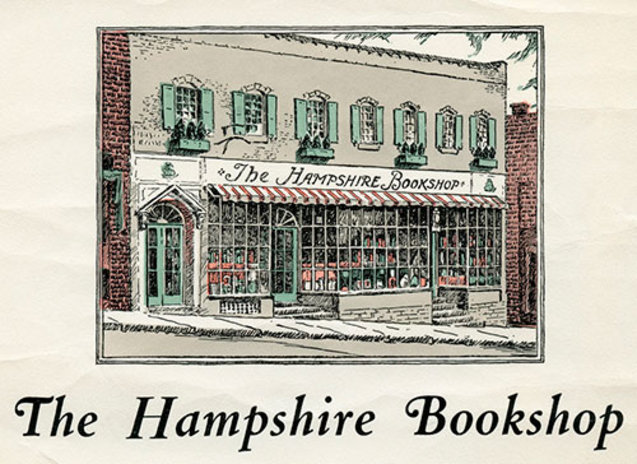 This exhibition of books and images—from Smith College Special Collections—marks the centennial of the founding of The Hampshire Bookshop in Northampton, MA in 1916.

… the Hampshire Bookshop has always been more even than a great bookshop. Here books are not only sold but published as well. Here hospitality and entertainment go hand and hand with learning … Here have come sailors, explorers, publishers, scholars; and through these doors have passed the living presences of the great writers of our time—appearing in the flesh for a few hours, and remaining forever thereafter in the spirit to become part of the very atmosphere of the place. Here is an institution which has had a profound effect on the cultural life of an entire region.

This is high praise on the 25th anniversary of the Hampshire Bookshop, founded in Northampton, Massachusetts on April 7, 1916 by two Smith College alumnae: Marion E. Dodd and Mary Byers Smith. Dodd said that a casual remark by her fellow alum who wanted a College bookstore led to the Hampshire Bookshop. It was one of the first bookselling firms in the U.S. to be founded, owned, and managed by women. From its start, it had strong ties to Smith College. Its managers and many of its employees and Board members were alumnae, as were the vast majority of its stockholders, but it was not a college-run enterprise. It served as a bookstore both for the College and for the wider community, offering trade and University Press books, textbooks, children’s stories and toys, gifts, stationery, author readings and book-signings, and a welcoming and intelligent atmosphere. The Bookshop was a vital part of Northampton and New England for fifty-five years. This exhibition marking the centennial of its founding offers a glimpse into this extraordinary enterprise.

The curator of this exhibition, Barbara B. Blumenthal (Smith College class of 1975 and rare book specialist in the Mortimer Rare Book Room) is deeply indebted to publishing historian Barbara A. Brannon, for her mutual love of The Hampshire Bookshop. Brannon’s research has provided great assistance and inspiration in the preparation of this exhibition. Items on display are from the Hampshire Bookshop Collection, Mortimer Rare Book Room, and the Marion E. Dodd Papers, Smith College Archives.