We are experiencing technical difficulties with Sign In and My Account functionality in Discover Advanced. If you need help with loans or requests for library materials, please Ask Us 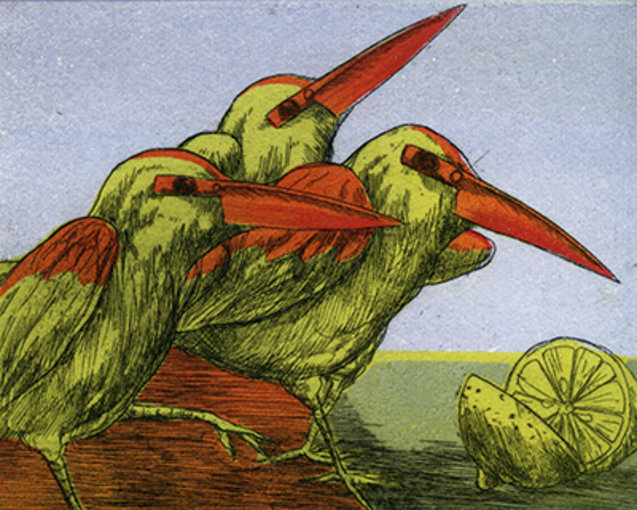 Michael Kuch began drawing in pen & ink at the age of eleven at home in northern Vermont; one year later he had a one-man show at a local museum. He remained self-taught until he came under Leonard Baskin’s wing at Hampshire College. After college, Kuch worked for more than a decade, until his mentor’s death in 2000, printing etchings for Baskin’s Gehenna Press in Northampton. In 1994, Kuch established his own Double Elephant Press, with the publication of a book of frog etchings, A Plague on Your House. The book contained a tongue in cheek exposition by Kuch on the demise of frogs that was more about human vulnerability. For the past twenty years Kuch has worked with book artisans in the Northampton area, notably the letterpress printer Art Larson, as well as numerous bookbinders. Lately, Kuch has delved into printing his own etched text and made forays into bookbinding.

The Mortimer Rare Book Room sponsors an annual McGrath Lecture in contemporary book arts, named for Harold P. McGrath (1922-2000), master printer. McGrath was a vital and beloved part of the local book arts community, printing for Leonard Baskin (Gehenna Press), Barry Moser (Pennyroyal Press), and Alan Robinson (Press of the Sea Turtle). McGrath mentored and befriended dozens of aspiring printers, artists, bookbinders, and other practitioners of the book arts. A festschrift book, HPM, was published in 1991 to honor the 50th anniversary of McGrath’s life as a printer. On the occasion of Michael Kuch’s McGrath Lecture, Twenty Years of the Double Elephant Press: Harnessing Influence & Ignorance, a modest exhibition of books from the Double Elephant Press is on view outside the Mortimer Rare Book Room through December 15, 2014.

Complete collections of Kuch's Double Elephant Press are housed in the Mortimer Rare Book Room at Smith College, the Library of Congress, and the Yale University Beinecke Rare Book & Manuscript Library, among others. Selected books also are held by The National Gallery of Art and the Metropolitan Museum of Art, as well as more than sixty other institutional collections. His latest book of etchings, illustrating an unpublished story by Margaret Wise Brown, The Little River, was recently honored with two awards at the UK Fine Press Book Fair in Oxford, England. It was recognized in 2013 with both the Judges' Choice Award and the Parrot Prize for the best-illustrated book printed in the previous two years.