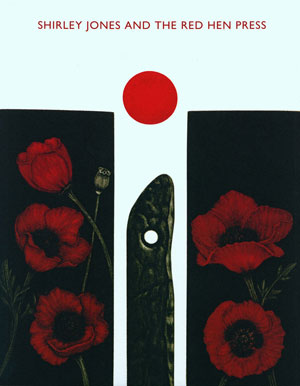 Book cover: Shirley Jones and the Red Hen Press, a bibliography by Ronald D. Patkus, with commentary by the artist

Shirley Jones is an accomplished writer, printer, and graphic artist who presents her work in book form. She was born and brought up in the Rhondda Valley in South Wales. After studying English literature at University College Cardiff, teaching in London, and bringing up three children, she attended the post-graduate course in printmaking at Croydon Art College, where she produced her first book while a graduate student in 1975.

In 1983 she named her press the Red Hen Press. Her art strikingly complements her own poetry and prose pieces. The themes of her books are very personal—even the passages she selects to translate from Old English and Old Welsh—and they can be intimate, politically charged, or celebratory of her homeland. She crafts each limited-edition book as a total concept, controlling each element herself: subject matter and words, paper and ink, appropriate typeface (text usually printed letterpress), the unity of text and image, and the design of the binding or box. Jones has used many different graphic techniques successfully, but she has a special affinity for aquatints and mezzotints. 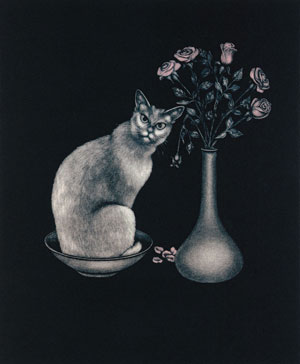 On exhibition are Red Hen Press books and prints—produced between 1985 and 2009—in the collection of the Mortimer Rare Book Room. The process of mezzotint engraving is illustrated in a series of successive proofs of one image from Jones’ book, Ordinary Cats. The labels consist of Shirley Jones’ own words.

Shirley Jones has visited Smith College a number of times to show us—staff and students—her latest book. The Mortimer Rare Book Room curated two exhibitions and hosted more formal talks by Jones in 1989 and 1996. Shirley Jones will again address a Smith audience on “Words and Print: Thirty Years of the Red Hen Press,” on Thursday, September 26 at 4 pm in the Neilson Library Browsing Room (followed by a reception in the Book Arts Gallery). 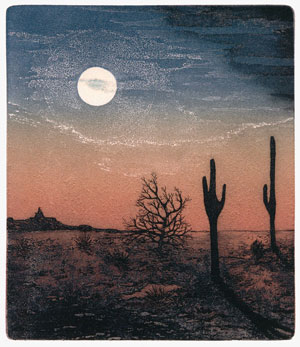 A bibliography, Shirley Jones and the Red Hen Press (which is available for perusal and purchase in the Mortimer Rare Book Room) contains details—compiled by Ronald D. Patkus, Head of Special Collections at Vassar College—about the contents and physical properties of the books. It was published on the occasion of the thirtieth anniversary of the Red Hen Press by Vassar, the University of Vermont, Smith College, and Swarthmore College, each of which have mounted retrospective exhibitions of Shirley Jones and the Red Hen Press in 2013. Order form.

[Image right] Shirley Jones’ image of the Arizona landscape created after her first trip to the U.S. in 1983.