Exhibition: From a Botanical Family, January-June 2011

From a Botanical Family: Emily Hitchcock Terry (1838-1921) was on view in the Mortimer Rare Book Room January through June, 2011. Curated by Daria D'Arienzo. 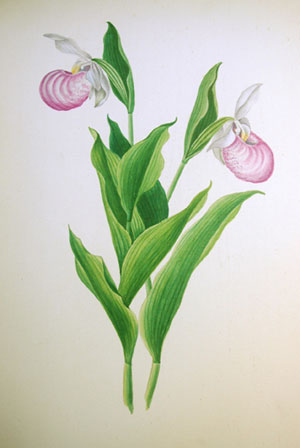 Emily Hitchcock was the youngest daughter of geologist and Amherst College professor and president Edward Hitchcock and his artist wife Orra White Hitchcock. Emily shared her parents' passion for art and science. She studied and collected flowers, particularly ferns. She was a talented artist who drew and painted flowers. Emily married Reverend Cassius Terry in 1870. In 1872 they moved to Minnesota, but a few years after Cassius' death in 1881, Emily returned to Northampton. She was the Matron of Hubbard House for 25 years, from 1884 to 1909, during which time she also continued her "botanizing."

This exhibition features photographs of Emily and her family and drawings and paintings by her, primarily from the Smith College Archives and the Mortimer Rare Book Room. One of the featured items in the exhibition is a painted herbarium, American Flowers, of 142 watercolor flowers and grasses made by Emily between 1850 and 1910, of plants in Minnesota, Vermont, and Massachusetts. Some of the plants were growing right here in Northampton and nearby communities.

The curator of the exhibition, Daria D'Arienzo, has worked with the Hitchcock family papers at Amherst College since 1984, as Archivist of the College and Head of Archives and Special Collections until 2007. She has written articles and mounted several exhibitions on Orra White Hitchcock, Emily Hitchcock Terry's mother. The most recent is Orra White Hitchcock: An Amherst Woman of Art and Science, curated with Robert L. Herbert, on view at the Mead Art Museum, Amherst College, January 28 through May 29, 2011.

D'Arienzo gave a talk about Emily's mother Orra White Hitchcock: An Illustrated Life on Tuesday, May 10, 2011, at the Conway Historical Society, at 7:30 p.m. 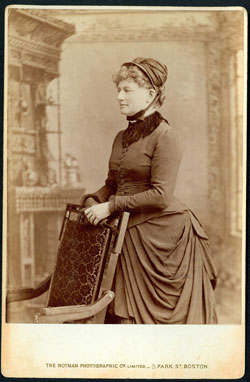 “As long as I live I shall work in botany,
if I have any eyes to see…”

“Who knows but you may hear of me as an artist yet?”

Emily Hitchcock Terry had a passion for flowers. And she loved to draw. Thus she had the core combination for a sound scientific botanist and a true botanical artist. As a field botanist Emily both collected and painted flowers and grasses.

Emily Hitchcock was born on November 9, 1838. She was the youngest of six surviving children of geologist and Amherst College professor and president Edward Hitchcock and his artist Orra White Hitchcock. Art and science were in her blood and she was proud of her heritage.

Emily was a scientist, like her well-known father, Edward Hitchcock, and an artist, like her mother, Orra White Hitchcock, the “earliest and most often published woman artist” of the Connecticut River Valley. Emily was Minnesota’s “first botanical artist and her paintings represent the first portrayal from nature of Minnesota’s flora.” Both Orra and Emily were field botanists and primarily scientific illustrators.

From 1865 to 1866, Emily attended The Cooper Union a coeducational, non-residential tuition free college where the study of science and art were equally emphasized.

In 1884, she returned from Minnesota to Northampton and became Matron of the Smith College student residence, Hubbard House, where she remained for 25 years, until 1909. There she botanized, gardened and made conventional flower and fern herbaria. The Vermont countryside was her summer retreat, and was an authority on the ferns of Vermont.

For more than 35 years, Emily made botany the center of her life. In June 1913, Emily presented her American Flowers painted herbarium of 142 watercolor flowers and grasses made between 1850 and 1910 to the Department of Botany at Smith College. It is the most significant expression of her scientific skill and artistic talent. Emily’s painted herbarium follows in the tradition of her mother Orra White Hitchcock’s own album of watercolor flowers and grasses, Herbarium parvum, pictum. Today American Flowers is part of the Mortimer Rare Book Room collection.

Emily Hitchcock Terry died on February 6, 1921. The former president of Smith, L. Clarke Seelye, wrote to her family: “She was highly esteemed by her many friends and the beauty and strength of her character will not soon be forgotten.” 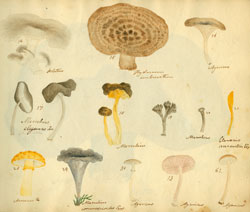 Fungi selecti picti watercolors by Orra White Hitchcock with an introduction by Robert L. Herbert Professor emeritus, Mount Holyoke College. Printed in an edition of 500 copies. $5. Out of Print.

Reproduction of an album (in the Smith College Archives) of watercolors of mushrooms by 19th-century botanist and artist Orra White Hitchcock, with notes by her husband Edward Hitchcock, Amherst College professor and president. These paintings were done in the summer of 1821, just after the marriage of Orra and Edward, as they explored the fields and woods of western Massachusetts.