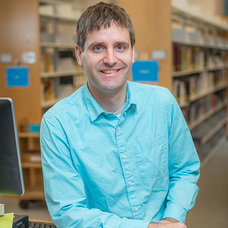 Dominique is responsible for overseeing the daily operations of Access Services across all libraries on campus. He can assist with any questions related to searching and requesting materials through the online catalog, fines, course reserves/e-reserves, and using and accessing any other patron services offered within the libraries.

When not at work, Dominique enjoys spending time with his family, playing games, going on walks and picking out books at Forbes Library for his young son. He grew up in Edmonton, Alberta, Canada and worked at a high school for “At-Risk Youth” for 5 years where he was the head administrator. Before moving to Northampton in 2013, he worked as an Academic Services Coordinator with the Department of Political Science at Emory University in Atlanta, Georgia. He loves travelling; having visited Argentina, Chile, Costa Rica, Spain and Portugal, and enjoys going to visit family in Canada. He is also interested in supporting social justice causes having protested issues like the G8, U.S. military action in Iraq and Afghanistan, People’s Climate March, and the 2017 Women’s March.