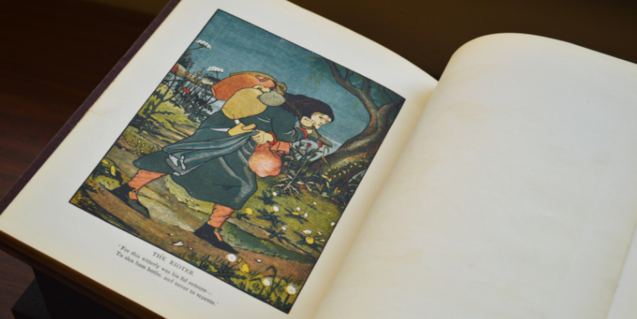 Image from Chaucer for children: A Golden Key. Illustrated with eight coloured pictures and numerous woodcuts by the author. Mrs. H.R. Haweis. London: Chatto and Windus, 1907.

Judith Raymo has deep ties to Smith, including serving on the President's Library Roundtable; her late husband, Robert R. Raymo, began assembling the Chaucer collection in the 1960s.

“We are so grateful that Judy chose Smith College as a recipient of this collection,” said Beth Myers, who directs the Special Collections department. “We take pride in the fact that our repositories contain materials of extremely high research value, and the Chaucer materials will be used by students, faculty, staff and the broader community.”

“Chaucer’s poetry has been studied at Smith continuously since the college’s founding,” said Nancy Bradbury, professor of English language and literature. “One of the most exciting aspects of this extraordinary gift is the way that the Chaucer collection complements Smith’s curriculum and the existing strengths of its Mortimer Rare Book Collection.”

Bradbury believes that Robert R. Raymo showed unusual foresight in collecting not only valuable very early editions and fine press books, but also ephemeral materials illustrating the reception of Chaucer’s works in later centuries. “Two thriving areas in current scholarship and in our teaching at Smith are the study of the material book—not just its text, but the many other features that affect reader response—and also medievalism, the study of the continued influence of the Middle Ages on later periods, including our own,” said Bradbury.

The Chaucer materials were donated in July and will be made available for research use as soon as they are cataloged. Books in the collection will be especially useful for students and faculty in medieval studies, history, English and book studies, as well as students taking courses such as Chaucer’s Canterbury Tales and Victorian Medievalism.

Geoffrey Chaucer (1343-1400) was an English poet and author whose best-known work is The Canterbury Tales. Chaucer experimented with nearly every literary genre known to his age and remains a beloved and widely read medieval writer.

Smith College Special Collections is part of the campus Libraries, and is a widely recognized repository for women’s history, rare books and women’s liberal arts education.