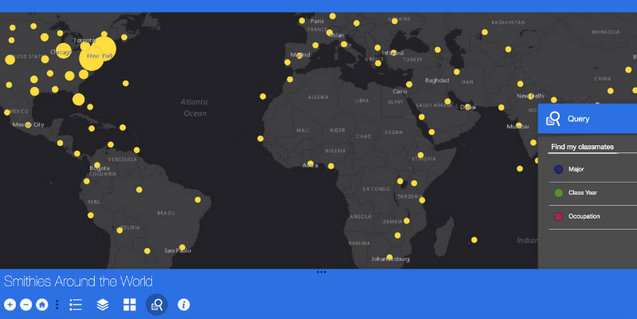 You never know when you’re going to run into a Smithie! Data show that Smith graduates are living and working in over 90 countries around the planet. Thanks to a new, interactive Smithies Around the World map, you can virtually travel the globe and see the visualization for yourself. The map supports filtering data by class year, major, and occupation, as well as find majors of a specific class year or years.

The Smithies Around the World web application was designed by Spatial Analysis Fellow Emma Harnisch, and advised by Spatial Data Specialist Tracy Tien and Spatial Analysis Lab Director Jon Caris. All three work out of the Smith College Libraries Spatial Analysis Lab. The project was created in preparation for open house events during May 2019 Reunion weekends. Alumnae were excited to find themselves on the map and began discussing ways to use the tool for networking, especially when they saw other Smithies in their area.

The data for the map were collected by the Office of Development with help from senior researcher Timothy Enman and student assistant Nancy Yun. The data were cleaned up to organize by class year and major, and then geocoded using alums’ current city to represent them on the map. Smith currently has data on active alums who graduated between 1927 and 2018, representing nearly 45,000 people.

Majors information associated with each alum was also cleaned up to represent our academic departments today, which allows users to find all iterations of majors over time to connect with fellow scholars. Kathleen Foley in the Office of Institutional Research provided support in understanding how majors at Smith have changed over time. The map was last updated in May 2019, and will be updated as future classes graduate.