All Smith libraries are closed for
the remainder of the semester. 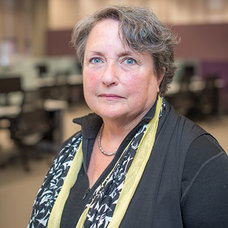 Ellice began working in the Smith archives as an Ada Comstock Scholar in the Archives Concentration where she assisted in processing the papers of activist-scholar Guida West. She later used West’s work with the National Welfare Rights Organization to frame her capstone project, which borrowed its title -- "The War Against Poor Women is a War Against All Women," -- from a nationwide campaign to educate professional, elite women about their personal stake in combating attacks on welfare mothers.

Ellice began her career as a newspaper and television reporter and editor in Newark, New Jersey and New York City. She transitioned into political work, serving as chief of staff to an elected official in the Washington, D.C. area before moving to New England. She has also worked as a professional event planner, coordinating conferences including, “Where and When I Enter,” a symposium honoring retiring Smith Professor and Meridians Editor, Paula J. Giddings.

Ellice currently works with the other members of the Special Collections Technical Services team on the ongoing project of making the extraordinary materials in the Sophia Smith Collection, College Archives and Mortimer Rare Book Collection increasingly discoverable and usable by students and other scholars and artists who give voice to the stories these materials tell.