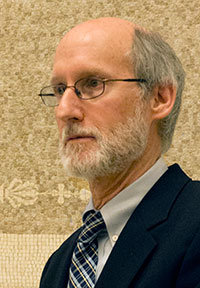 View a recording of the event on the Smith College Libraries Youtube channel.

John Bidwell, a notable book arts historian and librarian, will present "Good Cop, Bad Cop: Matisse and His Publishers," focusing on the collaborative nature of making books. Bidwell is currently Astor Curator of Printed Books and Bindings at The Morgan Library and Museum in New York City. One of his abiding interests, on which he has written extensively, is the history of papermaking. Bidwell also curated an important exhibition on Matisse at the Morgan Library in 2015: Graphic Passion: Matisse and the Book Arts. Bidwell has worked at Williams College, the Rochester (New York) Institute of Technology, and the William Andrews Clark Memorial Library in Los Angeles. While curator of graphic arts at Princeton University in the 1990s, Bidwell became familiar with the illustrated books of Enid Mark.

This is the fourth annual Enid Mark Lecture on Contemporary Book Arts & Poetry, in honor of the memory of artist, writer, and fine book publisher Enid Mark, class of 1954. Sponsored by the Mortimer Rare Book Room.

Enid Mark ‘54 was passionate about words and imagery. From the 1980s until shortly before her death in 2008, Enid carefully considered all components of her books: text (her own words or those written by others, many of them modern women poets); imagery (her own artwork); type design and layout; binding. In creating her books she collaborated with a small group of New England artists, including bookbinders Barbara Blumenthal and Sarah Creighton, and printers Dan Keleher and Art Larson. Timothy Sheesley printed the illustrations in most of her books.

Enid attended the High School of Music & Art in Manhattan, then studied English literature and studio art at Smith College. She pursued painting and printmaking in the early years of her career and came to favor the technique of photolithography. In 1986, she founded the ELM Press. Her work is included in more than 100 private and public collections in the United States, Canada, England, and Israel. Enid received a 2006 Fellowship from the Pennsylvania Council on the Arts in recognition for her work in book arts. Among her other honors are a Pew Fellowship in the Arts and the Leeway Foundation Award for Achievement. In 2004, her book The Elements was awarded the 9th Biennial Carl Hertzog Award for Excellence in Book Design from the University of Texas/El Paso.